Finding my Way to Trees for Life

by Balbir Mathur
Founder and President


I came to the United States seeking wealth, power and prestige. I found that each of those were lacking without a sense of sacredness, and thus began a new journey for me.

On this journey I discovered that the secret to sacredness is sacrifice, which in turn leads to service. My search for a type of service that expresses sacredness led me to Trees for Life.

Walking on this path led me to serve the poor in developing countries. I found that my task was to demonstrate to people in practical ways how they themselves could change their fundamental paradigms.

To summarize: I started on a journey to find wealth, power and prestige, and what I ended up finding was the formula for self-empowerment. I wanted to be on the top of the world, and I ended up learning how to be a servant of those who serve.

I came to a realization that I could inspire the poor to make sacrifices and touch sacredness only in an atmosphere where love and caring were the dominant factors, rather than in a business-like organization where results and achievement were the driving force.

Thus, over the past twenty-seven years or so, a worldwide family grew. Each community was exhorted to define their own problems and find their own solutions. I would be there to help them. The emphasis was on their initiative and planning, not on their lack of resources. As a result, the family grew with a minimum of organization and material resources.

This format had much to do with my personal makeup and experience, and does not constitute advice to others.

That which we call "Trees for Life" is made up of three very distinct and yet interconnected areas:

Let me describe each of these areas in a little more detail.

This is a shorthand statement for a complex set of activities that take place in the field. It is a one-on-one connection that takes place in communities, with individuals, and in meetings. Their issues are usually the same, but their situations and personalities are unique. It is a very time-consuming process and requires an immense amount of patience.

This area is where I am in my element and feel most comfortable. I spend some sixty to seventy percent of my time on this aspect and the follow-ups that it requires. It is the self-generating aspect of our work. Each seed planted over a period of time produces its own fruits, and no one knows or remembers who put the seed in the ground.

In the early years, I tried to hire people in developing countries and train them in order to form an organization or a chain to further replicate my work. That effort turned out to be a disaster. I found that this process works only if a person is passionate about it. It has to be internally driven; one cannot be effective if they do it merely as a job, a task or a need to be filled. Devotion, not training, is the key.

As an organization, this function takes some eighty percent of our collective time and energy.

This is the area of our greatest organizational strength and where I believe Trees for Life has made a special contribution. In this respect, we are a well-oiled machine; everyone knows what role to play and how. We know what strategies to use and have the patience and faith to patiently follow through with each step. Collectively we are maestros in this area.

For example, Jocelyn Jackson, a native of Wichita and a Peace Corps volunteer who served in Mali, West Africa, recently told us: "After reading Lowell Fuglie's book 'The Miracle Tree' and receiving Moringa resources from Trees for Life I traveled to Senegal from Mali to witness the cultivation of Moringa leaves and the use of Moringa powder to combat malnutrition. I visited a nurse in Zuguinchor who was so inspired by the positive results of using Moringa powder to supplement infant diets that she continued to grow Moringa trees in the front courtyard of her dispensary even after funding for the project ended. Her face shone with pride for these trees and the remarkable impact they have on her patient?s lives. I will never forget that smile. It was the smile of hope, empowerment and love for the children she serves."

Let me retrace some of the steps that were taken for that information to reach Jocelyn and, through her, the health care workers in Mali.

Some 17 years ago, when we found out about the immense value of the Moringa tree, we started to help people plant these trees in India. Then we realized that, for this process to gain momentum, we had to learn from the people themselves how to communicate the message.

So in 1995, we dispatched a team of six people from Wichita to a remote rural area of Orissa, India. They were joined by a team of more than two dozen native experts in India and a camp was formed in the middle of a cluster of twenty villages. One of our reasons for selecting this site was that it was one of poorest areas in the world.

It was an elaborate study in which we met with a large number of focus groups from each segment of the society. In several meetings a day, we met with groups consisting of men, women, farmers, merchants, scientists, students, teachers, youth, etc. Based on their input, we created specialized communication tools which were then tested in the field. This process of identifying and developing the tools took very intensive work for five months. After that, the tools were provided to the people for their use.

A year later we sent an independent team to study the impact of our communication tools. The finding was that 84% of the families in that area had started to include Moringa leaves in their meals two or three times a week. This finding startled everyone.

As a result, we became the focal point of creating tools of communication on Moringa for the grassroots as well as to inspire the scientific community to do further research. Today a very large number of people are planting millions of Moringa trees?thousands of times more than we could have ever done ourselves.

Helping create the right tools to facilitate the work of community leaders in developing countries is the essence of Trees for Life. In this area, we are like a laboratory and not a factory. Our role has been to experiment, to discover what kinds of tools are most effective. In the developing countries Trees for Life has acquired an excellent name because of this aspect.

The challenge is that this aspect is neither easily explainable nor readily fundable. Up to now, we have been able to continue with this work only because we were exceedingly fortunate to have a few strong donors who wished to support it. Also because this aspect was not readily fundable, we kept our salaries and overheads very low.

The general perception of an international nonprofit business is that it receives funds and sends funds to its branches or partners overseas. Since our name implies trees, the natural question people ask is: "How many trees have you planted?"

Even though millions of trees have been planted as a result of our being, it has not been as a result of our shipping trees or funds. It has happened because we have created awareness and inspiration, and as a result people have mobilized to plant trees-with a minimum of resources from us and lots of sacrifice on their own part. 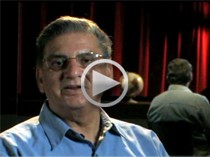 The Essence of Trees for Life