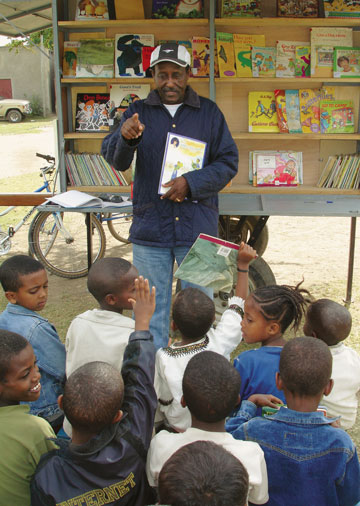 When I first met Yohannes Gebregeorgis, little did I know that the fire of his vision would ignite a fresh spark in my life.

Yohannes spoke at Trees for Life about establishing libraries for children in Ethiopia. He described a world unimaginable to me in America, a world where most children do not set foot in school. It is a world so devoid of books that in the few places where they do exist, they are kept under lock and key. 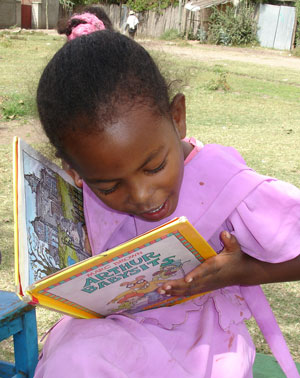 A world of wonder is discovered by children who have never had access to books before.

As a college professor, I had devoted my life to education. Yohannes helped me to see that children in Ethiopia remain poor because illiteracy traps them in poverty. I was emotionally shaken. But how could my passion for education possibly serve children half-way around the globe?

The following spring, my husband was invited to an academic conference-surprisingly, in Ethiopia! We both signed up, and made arrangements to visit Yohannes.

Yohannes gave us a tour of Shola Children?s Library-the first library established by his organization, Ethiopia Reads. Girls and boys filled every chair in the 126-seat facility. I was deeply touched. During their free time that Saturday, these children had intentionally chosen to keep company with books. 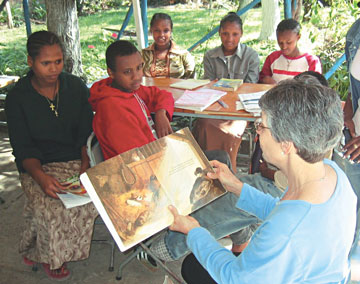 Hunger for education brings children to Shola Children's Library-even on Saturday afternoon. Jeanne Smith found that, due to lack of schools and education, storybooks often help even older students build their literacy.

Later, driving through the countryside, I saw firsthand evidence of illiteracy. Children either worked doing chores or ran in the streets. None were in school. There were no schools. No teachers. No books!

In towns and villages where schools did exist, they were filled to capacity. Classes met for half days to double up on teachers and facilities. Parents do want their children educated, I thought. They realize education's potential as a light in their tomorrows. 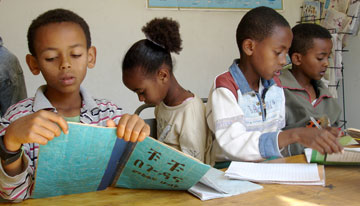 Focused intent in these young faces reflects their serious pursuit of education as a source of hope for their future. Trees for Life joins hands with Ethiopia Reads and other groups worldwide to provide books that enable children to uplift themselves.

After we returned to the USA, I knew I had to get more intimately involved. I opted for early retirement to work on projects that I was passionate about.

One of these was "Books for Life," an educational branch of Trees for Life. I was excited about this effort to serve children who have little or no access to books. Books for Life introduces them to the joy of reading and learning. It helps communities start libraries and acquire books that spark light and learning in children's imaginations. 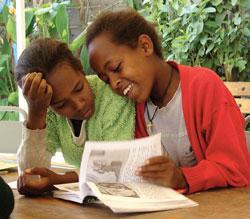 When I first walked into the office to volunteer, before me, overflowing from several rooms and spilling into the hallway were more than 26,000 used books! They had been donated by the Wichita school district for children in developing countries.

In the months to come, other volunteers and I sorted, categorized, inventoried, and boxed those books. They were to be shipped to several countries-including Ethiopia. Yohannes had established three new libraries, with several more on the way. 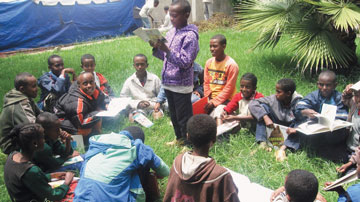 The landscape of learning opens up for children when they are introduced to books. Better education brings self-confidence and more opportunities to find a way out of poverty.

In January I took a two-week break for a travel/study tour. On my first day back, I sped down the highway to Trees for Life to continue sorting books.

Entering the sorting room, I froze in the doorway in shock. The room was-empty! In my absence, a huge group of dedicated volunteers had come and finished the work.

As I stood alone in that empty, silent room, a surge of joy washed over me. In my mind's eye I saw the books dancing the waves to Ethiopia?and other parts of the world. I saw children flipping pages, taking delight, and being empowered-through books!

Suddenly, those books took on another dimension for me. They became life-saving, mind-transforming, precious jewels of knowledge. They were bringing hope, dignity and a bright and promising future to some of the poorest children on our earth.

Then it hit me: Yes! My passion can serve and is serving children half-way around the globe. This was why I had come to Trees for Life-to be part of something bigger than I am, and to play my own small role in igniting joy and hope in people's lives.

Only poetry could express the joy in my heart as I drove back home that day: "Ah, but a man's reach should exceed his grasp, or what's a heaven for??"(Robert Browning). 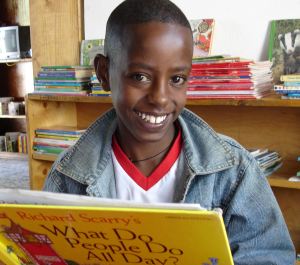