The Joy of Reading 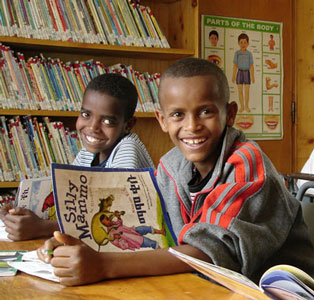 As I stepped through the large metal gate into the library courtyard, I felt myself relax. My nerves had been frazzled from the noisy, busy atmosphere of Addis Ababa and our bumpy ride through rock-strewn, dusty back streets. 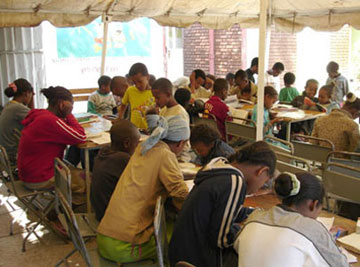 More children come than the main library can hold, so tents are set up in the courtyard.

In the courtyard were two large open tents where children sat quietly reading or doing schoolwork. On my right was a small garden. Stately trees, tropical plants and flowers gently waved in the breeze. 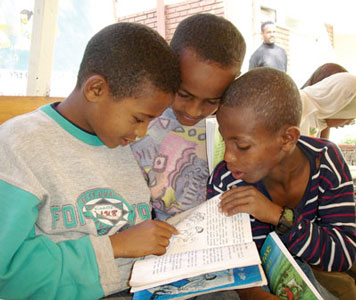 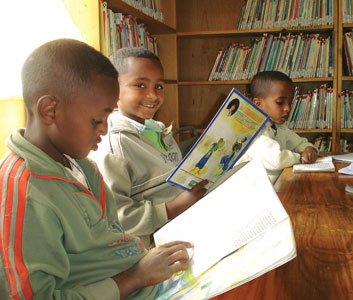 This isn't just a library," I thought. "This is a haven for children."

I was in Ethiopia for a week, on my way to a conference in Ghana. I had come to visit my friend Yohannes.

But this story began long before that.

In 2003, Yohannes Gebregeorgis came to Trees for Life in Wichita to share his vision. He grew up in Ethiopia and never saw a reading book until he was nineteen. He fell in love with reading and eventually became a children's librarian at the San Francisco Public Library. When he learned that children's books were still practically unavailable in Ethiopia, he envisioned starting the first children's library in his home country. 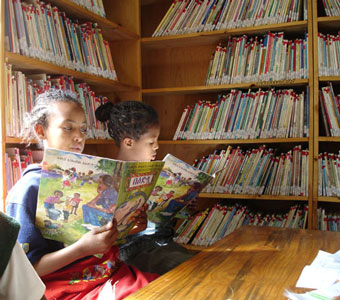 Seeing his deep commitment to serve, Trees for Life helped him establish the library. Now, three years later, I was visiting Yohannes to see how things had progressed. As we toured the Shola Children's Library, he told me it had received more than sixty thousand visits from children this year. 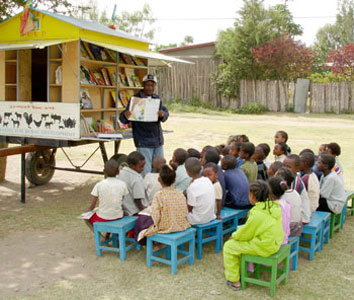 Yohannes founded the nonprofit Ethiopia Reads, which has already grown beyond the first library. With support from Trees for Life, they are helping nearby schools start their own libraries. In the town of Awassa, they have a reading center and have also created donkey-powered mobile libraries. They have even published several children's books in the native language and English. 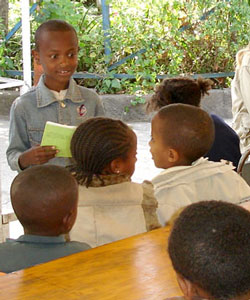 One day at the main library, I met a little boy named Robel. Like many children who come there, he is from a very poor family. This family of five lives on about 30 cents a day.

Later I got to visit Robel's home. He led me down a narrow alley, where two people could barely walk side-by-side. On either side were walls of mud and tin. He opened a door, and we stepped into a small, dark room about twelve feet square. This is where he lives with his mother and three brothers.

His mother welcomed me warmly and motioned me to a wooden chair. Then she graciously offered me tea and held out a tray of dinner rolls. I learned that she washes clothes for a very small fee. Robel's father lives in another town where he found work constructing huts like theirs.

Robel has been coming to the library regularly ever since it was opened three-and-a-half years ago. Back then he held the books upside down because he couldn't read at all.

Now Robel is the star reader at the library. He has read all 150 of their books in the local language, Amharic. Thanks to English classes at the library, he has also read several English books. Whenever they get a new book, he reads it to the other children.

At the library I asked him, "Would you like to read a book to me?" Robel's face beamed. "Yes! I'll get one of my favorites."

He quickly returned and sat beside me. He placed his book on the desk, and I felt a catch in my throat. It was Are You My Mother? one of my favorite books when I was a child.

Robel started reading, carefully pronouncing each word. My mind filled with images of my mother reading to me as a child. She was a school teacher and introduced me to books and reading. I found myself trying to hold back tears.

When he finished, I asked Robel what he wants to be when he grows up. "A pilot," he said, "or maybe a librarian." 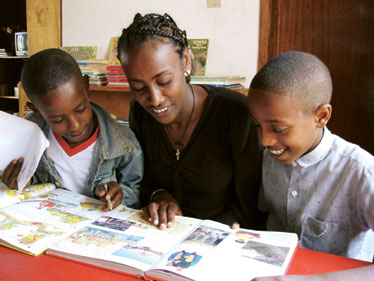 Later I realized-that day was my mother's birthday.

I thought of all the kids my mother helped as a teacher. And I thought of all the children around the world like Robel who have so much potential, if they could only tap into it by having opportunities to read and learn. By supporting libraries in several countries, Trees for Life is helping such children discover not only the joy of reading and learning, but also the hope of escaping from poverty and reaching for their dreams.

At the end of the week, as I was saying goodbye to Yohannes and my new friends at the library, I made a silent promise: I will do whatever I can to ensure that more children can benefit from libraries like this one. 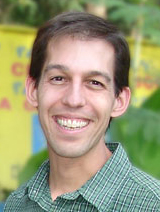 Jeffrey became a volunteer in 1993 after receiving a degree in English. After four years as a full-time volunteer, through the Brethren Volunteer Service, he joined the staff as a writer and editor.

. . . the joy of reading and learning is priceless to me and was my favorite thing to do with my children.

So thank you for giving me this opportunity to share in the lives of all those beautiful children even though I am not there to read with them !!

. . . What a delight. Your article Joy of Reading was beautifully written. Do keep up the great work you are doing there. . . .

God bless you in all you do.