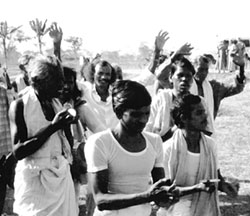 The small group of people welcoming us to their colony in Orissa, India carried drums and small hand cymbals. They began to play, singing at the top of their lungs and dancing rhythmically. One did not have to know their language to realize that they were praising God. It was a dance of thanksgiving.

Their singing was so joyful and uninhibited, I felt waves of love and emotion wash over me. My mind went blank; none of my nervousness or fears remained. They had broken down all the barriers in me, and I found myself clapping and dancing along with them.

As I looked at the people around me, I began to notice the rags they wore. I noticed that some of them had only stumps of fingers on their hands. One man was blind, and most of his nose was missing. Another had no toes on one foot. My mind reeled?how could these people give thanksgiving with such incredible joy?

This was my first time in India, and I had never met anyone with leprosy before. I had only heard stories from the Bible about lepers, and reports of how the disease eats away at a person's body, deforming them and making them a complete outcast of society. How could I relate to such people? Coming here, I had only hoped that I would not embarrass them or myself. 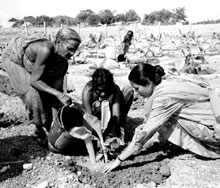 The lepers were getting ready to start a project supported by Trees for Life. They were preparing to plant bananas, lemons, and ginger on a few acres of land next to their colony. At that time, their only possible livelihood was to beg for food in town every day. Once their crops started to produce income for them, they would no longer have to beg.

After the dance, Balbir Mathur, the president of Trees for Life, was asked to dedicate the field. But he insisted that Father John and Sister Clementina perform the dedication. As leaders of the mission that supports the leper colony, they had selflessly served the lepers for many years. Balbir said, "I am only a postman who has delivered to you the efforts of other people."

I knew exactly what Balbir meant. As a Trees for Life volunteer in the United States, I had witnessed the immense amount of work that is done behind the scenes. While in India, I had also witnessed the selfless work of many people in order for this dance to take place.

People in hundreds of villages across India had been working for more than twelve years, experimenting with different trees and developing methods of sharing their knowledge with others. 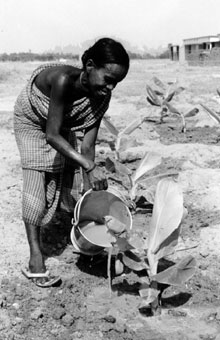 At the Trees for Life Learning Center in the state of Orissa, people with many different areas of expertise had come to share their knowledge with local villagers. Throughout the country there were scientists, artists, agriculture experts, writers, business people, musicians?each one finding a way to contribute.

I marveled at the reality of all these people contributing in various ways. Only through their efforts could this project at the leper colony take place.

Just two weeks later, we received word that the group of about twenty lepers had begun work on their plot of land. We soon returned to the leper colony for another visit.

When we got out of the jeep and looked at the field, we were all speechless with awe. The entire two and a half acres of land was covered with pits for banana trees. 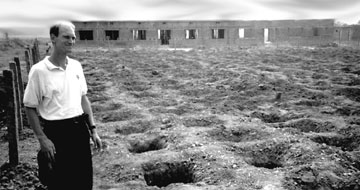 More than a thousand pits for banana trees were dug by the lepers, many of whom have fingers missing. "The soil felt holy in my hand." - Jeff Bibler.

The soil at the leper colony was the worst imaginable. It was like hard-baked clay paved over with gravel. The lepers used hand-held picks and hoes to dig pits for the banana trees?two feet square and two feet deep?in this dry, hard soil. It was very difficult, back-breaking work.

In a corner of the field, a small group of people were still working. Father John walked over to greet us. As he spoke, I could hear the intense emotion in his voice. "When the lepers are digging they wrap their hands with cloth," he said. "I have seen blood on some of the cloths, but still they keep on working. I had thought we could try this project, but I didn't know if they would do the work. I never expected this."

I asked Father John how many pits they had dug. He looked out at the field and answered, "One thousand, four hundred and seventy." 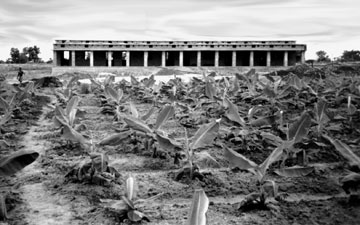 Beyond the banana field, which will produce fruit during the firstyear, a school is being constructed for local students and children atthe leper colony.

We walked to where the lepers were standing, and tried to express our awe at what they had accomplished. They shrugged it off. "This is not anything we have done," one man said. "This is simply the blessings of God."

When we were ready to leave, Balbir said, "This is holy ground," and he knelt to kiss the ground. I got down on my knees, and a thrill went through me?the same thrill I had felt during our dance.

Immediately I thought of all the people around the world who had helped create this miracle. I realized that the dance was much larger than the circle of people present at that time. The circle included all the people who had worked to make the dance of empowerment possible.

A thought entered my mind: Indeed, we are dancing with angels. 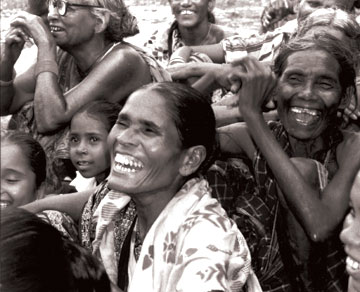 Smiles and laughter show the spirit of these women who will no longer have to beg for a living. Income from the sale of their bananas, lemons and ginger will help them provide for their families.