As our jeep bounced along the dusty, washboard road to Madantusi (mud-un-TOO-see) village, I wondered why I had agreed to come on this arduous four-hour trip. To Madantusi, of all places! 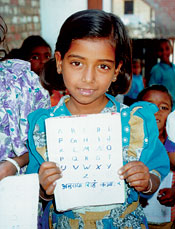 The pride of learning shines from the face of astudent at Madantusi village school. Once there was no school here,until villagers joined together, determined to provide education fortheir children.

I had first heard about this north Indian village from Jeff Bibler, a fellow Trees for Life volunteer from the USA. He had described this desolate, empty village, without even a simple school building. And the soil was so poor that the trees he had helped deliver had all died.

So when my friend Y.P. Chopra invited me to go with him to Madantusi, I was hesitant. But Y.P. only smiled and urged me to come with him.

As we approached the village we were greeted by a group of men sitting in the shade of a small, neat, newly whitewashed building. Smiling broadly, they came toward us. "Welcome to our school," one of them said, beaming.

I looked at the building, and then back at the men. "How did this school come to be?" I asked.

"Three years ago our children could get no education," the man said. "But we decided that they must have a school." And humbly they told me their story. 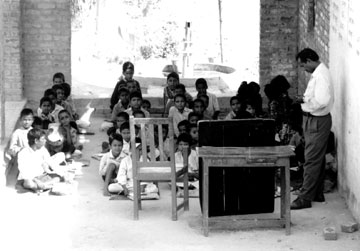 Eager students and their teachers quickly filled new classrooms built at Madantusi - even before all the walls were completed.

Determined to provide education for the children, these men had banded together. Even though they struggle to feed their families, they had taken precious time away from their fields and jobs and worked on the school building themselves. Working together for nearly three years, they had built the school with their own hands.

Now, they proudly told us, there are 400 children receiving an education here. "Today we have first through eighth grade," they told me. "Later we'll build a high school - maybe even a university!" Seeing the fire in their eyes, I knew it was possible.

One gentleman introduced himself as Mr. Nagendra Singh. His own children were all too old to attend the school. But though this quiet, unassuming man had nothing to gain personally, I could see from his face that for him this school was a labor of love.

When Mr. Singh showed me their school tree nursery, my heart sank. It looked just as I had heard - like a dead, salt-encrusted moonscape. 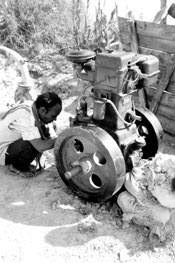 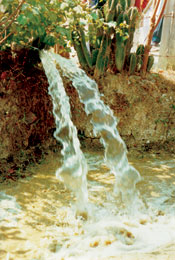 Life-giving water is supplied to the school grounds by a water pump. This precious water is essential for the fruit trees and vegetables the villagers are growing here to benefit the school.

But then he showed me the water well they had recently dug for irrigation. A group of Trees for Life supporters in the U.S. had supplied half the funds for a water pump, and an Indian business had provided the other half. The water will surely help rejuvenate this land.

Even though their first trees had completely failed, these men did not lose faith. Mr. Singh told me of their goal to grow fruit trees, ginger and turmeric here. Half the income from selling the produce will support education at their school. The other half will help other villages start their own schools and nurseries. Waving his hand to indicate the nursery plot, he spoke of this land becoming a model for other villages.

As Y.P. and I drove home, I thought of my own grandparents. They were also farmers, and had worked very hard so their children could get an education. Visiting Madantusi taught me something about the love behind their sacrifices. These villagers showed me what amazing things are possible, against great odds, when people join together to serve. Just for the opportunity to see their example, I am so very grateful. 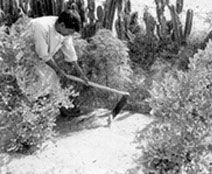 Flourishing fruit trees now grow on the perimeter of the school grounds. This piece of land was unable to support life before the villagers' efforts to regenerate it. Now students at the school enjoy bananas from these trees.

Three new classrooms have been built by the villagers for the growing number of students wanting an education here. Dedicated teachers teach subjects like English, which will open up many opportunities for these children.