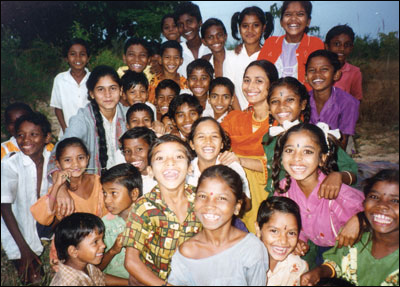 The road snaked through several villages of mud-walled huts. On the outskirts were rice fields, with interspersed patches of barren land. I was thankful our vehicles were air conditioned. It was February, but the temperature was 110°.

We were on our way to a relative's ancestral village in the state of Orissa, India. I didn't know it at the time, but this journey would end up transforming a cynic.

That cynic was me. 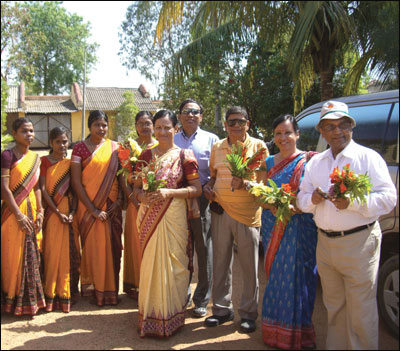 Lives blossom: A lush, vibrant community has sprouted where, just 20 years ago, the land was barren and people saw only darkness for their children's future.

In 1988, Dr. Saheb Sahu, my wife's brother-in-law, met my friend Balbir Mathur, president of Trees for Life. He invited Balbir to help the people of Mulbar, his native village. Saheb warned him that their poverty was extreme.

To everyone's surprise, Balbir was soon there. He arrived in that remote village in an open jeep on a brutally hot day (118°), covered in dust. What he found there was poverty beyond description. One villager articulated their collective feelings when he told Balbir, "We see total darkness in our children's future." 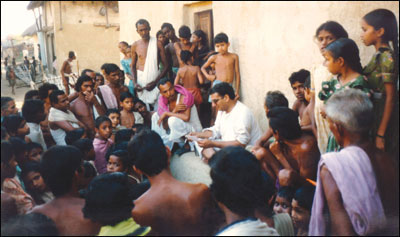 A visit from Balbir Mathur in 1988 (in white shirt), inspired villagers to plant the seeds of transformation.

Balbir posed a question to the villagers: "Are you satisfied with your poverty, or do you wish to change your circumstances?"

The overwhelming response was, "Ami korbo! Ami korbo!" (We shall overcome!).

Balbir promised to show them the way out, but they would have to do all the work. "The path is tried and true, but long and difficult," he explained.

Thus began a long march for the people of Mulbar. Over the years, I heard news of what was happening. Saheb's older brother Manaswi even wrote a book: Dancing with a Dusty Angel.

But I was skeptical. I grew up in a village myself. I knew that things had not changed in those villages for hundreds, perhaps thousands of years. I had also seen many such projects start, only to fall apart after outside intervention was withdrawn. So I was doubtful, to say the least.

That is, until my wife and I visited Mulbar on that hot day in February of 2009. 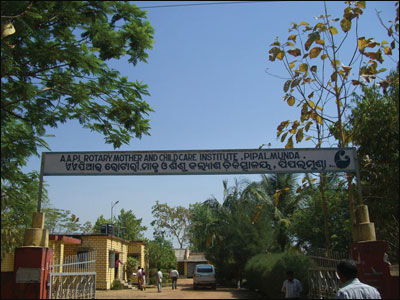 When we arrived, we walked through a lush, green oasis of tall trees, flowers, hedges and groves of fruit trees. Our guide, a local gentleman, said this land used to be totally barren, practically a desert. "On this 40-acre plot, there were only two trees," he said. Now there is a nursery that provides half a million trees each year to farmers. 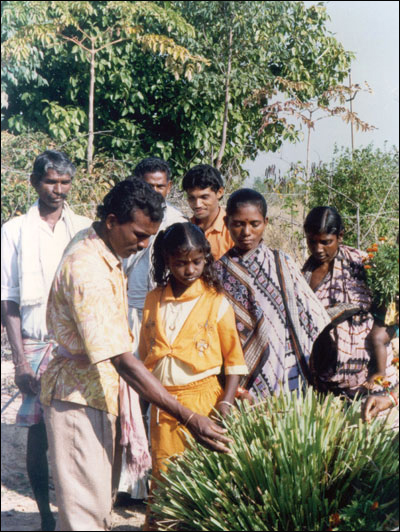 Desert bloom: Villagers turned a barren 40-acre plot into a green oasis. People now come here to learn how to rejuvenate their own land and grow beneficial plants.

We saw a water tank high in the sky. "There was not a drop of clean water in this entire region," our guide said. "Now there are more than 5,000 deep tube wells."

We walked by a series of five fish spawning ponds. They provide fish stock to farmers. 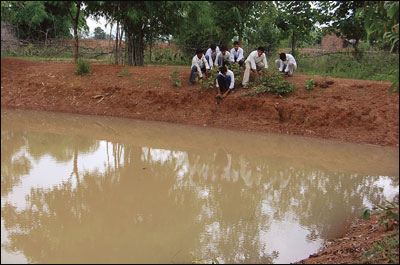 We stopped at a nearby science college that emphasizes nurse's training. In this part of India, people traditionally considered nursing to be an inferior profession. Because of this college, more young women are studying nursing, and thousands of young people have gained an education and marketable skills. The original building had a plaque stating that the foundation stone was laid by Balbir. 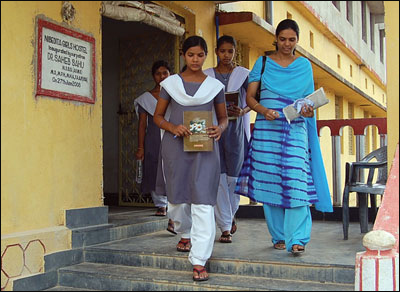 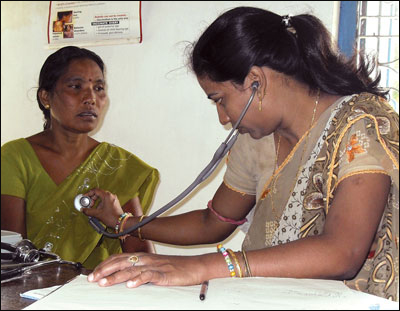 The pulse of hope grows ever stronger through learning. Young women study nursing and thousands of young people gain precious education and marketable skills at a science college and new high school.

We also visited the new high school, a stately white building with green hedges. Previously, the village had only a run-down, dilapidated structure, almost a one-room school.

I was surprised to be driving on a well-paved road, better than some roads in the USA. This used to be only a dirt trail, impassable during the rainy season, I was told. The prosperity of the people was obvious.

At the end of the day, we attended the inauguration of a new temple in Mulbar. The place was crowded, bustling with life and energy. The people here had broken age-old traditions by making the temple open to all—including "untouchables" and foreigners, who are usually not permitted. It was a declaration that not only had their lands and buildings been transformed, but also their entire outlook on life. 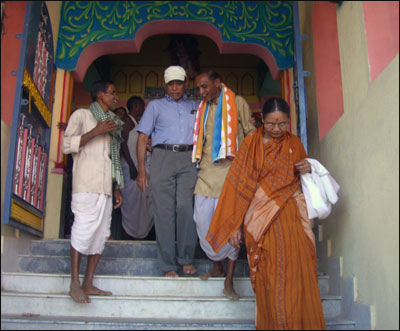 Open spirit: Villagers made a bold statement of their inner transformation by opening the new temple to all, including "untouchables" and foreigners, who traditionally are not allowed.

On our way back, I pondered why the progress of this village did not stop after Trees for Life left in 1997. Why does it continue unhindered?

There could be several reasons. When the work started, it attracted many other people like Saheb who could continue it. But perhaps it is also because Trees for Life did not focus on tasks, goals, objectives or numbers. Instead, they focused on empowering the people to help themselves.

One moment sums it all up for me. When we first arrived and met Kunja Babu, the local man who showed us around, he looked at us with rather suspicious eyes. Then Saheb said, "Oh, they are friends of Balbir."

Immediately, the man's whole demeanor lit up. He embraced me—and literally lifted me off the ground! In that hug, I could feel the physical and emotional impact Trees for Life has had on the lives of people here. Perhaps that is the key to empowerment.

I have known Trees for Life since its inception, but I had been skeptical all this time. You could say I'm a "show me" kind of guy. Well, I saw it.