I want to share with you about my miraculous week in Nicaragua - my third trip there in the last eleven years. I traveled with my husband, Ken, and fellow members of the Huntington, Indiana Church of the Brethren to visit our sister church in Tisma, Nicaragua.

Over the past decade I had become frustrated with our church's attempts to help the people of Tisma. In that time I had seen very little improvement in the people's lives. Ken and I asked Balbir Mathur, president of Trees for Life, how we could share Trees for Life's formula for empowerment with our friends in Tisma. I was overjoyed when he agreed to accompany us on this trip. 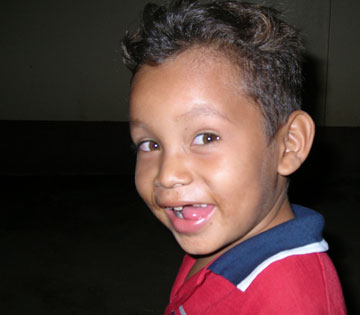 Since Balbir doesn't speak Spanish, I attended every meeting as the translator. This was a privilege because I got to see first-hand what Trees for Life does "in the trenches."

A way out of poverty

Balbir spent a day with some of the Tisma people, asking lots of questions. Next day a meeting was held under a mango tree with a group of farmers from two cooperatives. 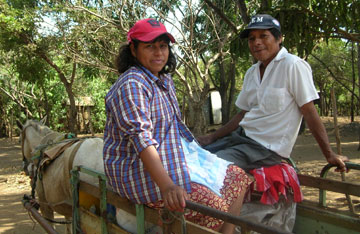 Balbir began by telling them his background. His great grandparents from India were very poor, but his grandfather found a way to climb out of poverty. Balbir came to the U.S. in 1958 seeking the formula for why some people, communities and nations become so powerful, while others remain weak and miserable. Balbir explained how it took him 30 years to figure out that formula. Now he shares this formula as a way of showing appreciation to someone who must have taught it to his grandparents.

Balbir told them that before they could comprehend the formula, they had to understand the importance of responsibility. They—not anyone else—were responsible for getting themselves out of poverty. Others might help them, but they had to do 95% of the work themselves. Their success or failure depended upon themselves.

After the farmers discussed this concept and understood it, they asked Balbir to proceed. He told them the formula was very simple and consisted of three parts:

Balbir then asked the farmers what their vision was. At first they could only talk about their financial problems.

Closing his eyes, Balbir listened for a few minutes. Then he shared another formula—in life we face problems and potential simultaneously. Both are real. However, when we focus on the problems, we energize those problems and cannot see the potential. So he asked them to focus on their vision: "What type of future would you like to see for your children"?

The farmers began to articulate their desires for quality crops, good farming equipment, access to new technology, and a profitable market for their crops. Like all other parents, they wanted their children to go to school, get good jobs and have a decent life.

Balbir then reminded the farmers that nobody knew their land as well as they did—they were the experts. Therefore they also knew the key to help themselves achieve their own vision.

Several immediately responded, "Money," and all others nodded their heads in agreement. "Certainly," Balbir replied, "but we know that we do not have the necessary money. So the real question is, 'What is the key that will help us get the money to realize our dreams'"?

After some discussion, the farmers concluded they were following age-old techniques, while the world had changed. Therefore they needed to learn the techniques of modern agriculture—planning, land improvement and planting crops which were in demand. They also needed modern equipment and an irrigation system.

Suddenly their faces lit up. "We need education!" I could feel that the energy of the group had shifted. It was a real breakthrough.

Having found the key to their vision, the farmers wanted to know how they would get such an education. Balbir suggested a process that they could continue to use after he left Nicaragua. He suggested that we take a small group of people to the National University of Agriculture and make some initial connections. Two farmers were selected to go with us.

It was an hour's trip to the University in Managua. We were lucky to catch the very busy Dean of Agriculture at the University. He said he would be honored to help because Tisma was his hometown. He introduced us to several other professors, all of whom promised to help.

Arrangements were made to bring more farmers from Tisma so they could be educated. The farmers were eager to learn.

Next day, a professor gave us a tour of the university, Moringa and dairy farms. 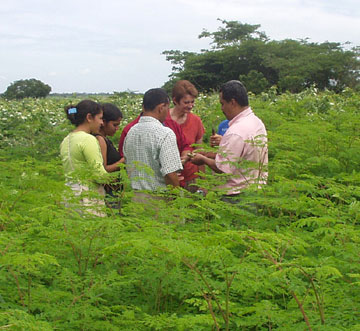 He talked about the high nutritional value of Moringa leaves and about their research, which proved that milk production and cattle weight can be increased substantially by adding Moringa leaves to cattle fodder. The farmers were surprised that this common tree that grows everywhere was so valuable.

On Sunday, the dean himself came to Tisma and met with a large number of farmers. We went to his family farm. He showed us a wide variety of crops and emphasized the importance of diversification, so the farmers would have income at various times in the year, as well as crops to fall back on if others fail. He was a powerful motivator.

On Monday another group of farmers went to the university. Experts from the departments of food preservation, village development, irrigation, and seed development met with us. We also had a tour of their tissue culture facility.

Balbir asked for a meeting with some women of Tisma. He said it was important that the women be included because development is an uphill struggle and laced with frustrations. Therefore it was important for women to lend their unique strengths.

This meeting was a transforming experience for the women. They were inspired to start their own project, a school for street children, which is another story in itself.

The universe will respond

Our last meeting included both the men and women. One of the farmers said he had learned many things, like how to think of solutions rather than problems. Another stated that he witnessed how others—like the university professors, "are attracted to us when we start taking action." Still another said he appreciated the opportunity to dream something positive. The ladies were now calling themselves Las Mujeres Milagrosas, "The Miraculous Women," and were the buzz of the whole community.

"How can we teach these formulas to everyone in Nicaragua"? one person inquired. Balbir suggested that when the farmers set an example by using the formulas themselves, others will come to them to learn the formulas.

Balbir reminded them about the importance of responsibility and unity. He advised patience because success is a series of small victories. 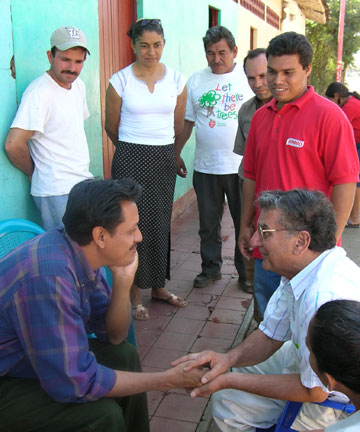 The style that Balbir used was essential. He did not just lecture. His talk was laced with stories that people could relate to. They participated, discussed, laughed, sang and were part of the process.

That week my husband and I witnessed how despair is converted into hope. We witnessed how life is transformed when we take the first steps.

Now I know that miracles do happen.