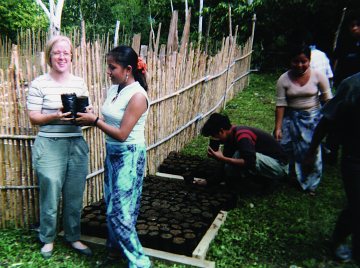 Planting with joy, middle school students of Heather Dean (left) care for tree seedlings that will be planted to protect the stream that provides water for their community.

As a volunteer from the USA serving in a remote part of Guatemala, one of my most moving experiences has been working with students at the village middle school. Over the past couple of years, I have seen how a simple tree project led to an incredible transformation in these students.

It all started when Guillermo Perez, the school principal, came to see me one day.

"Good news," Guillermo said. "The town council has decided to reforest the entire 'green area' that protects the stream."

That was great news. At one time, the whole area had been densely forested. However, during Guatemala?s civil war, the army took out the valuable lumber trees, leaving the land nearly naked. 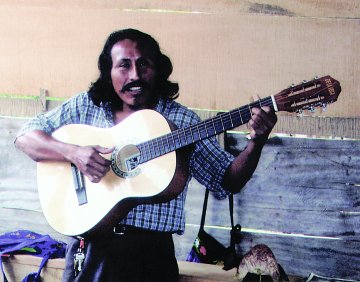 Inspiration: When school principal Guillermo Perez learned that his village needed trees, he recognized it as a unique opportunity for his students to participate.

After the war, a group of returning refugees founded the village of Copal AA La Esperanza (La Esperanza means "Hope"). The villagers worked hard to preserve the soil and adopted sustainable farming methods. However, the stream that provided water for the village remained in danger, since its banks were severely deforested.

"This is a perfect opportunity for the students," Guillermo continued. "What if we asked the town council to purchase trees from a nursery run by the students?"

The town council agreed. With generous funding from Trees for Life, the students went to work to create a tree nursery. They organized into groups, and every Friday was "tree day." Some groups found soil, while others looked for good black humus. Others mixed the soil and filled bags. Still others set out to find seed. 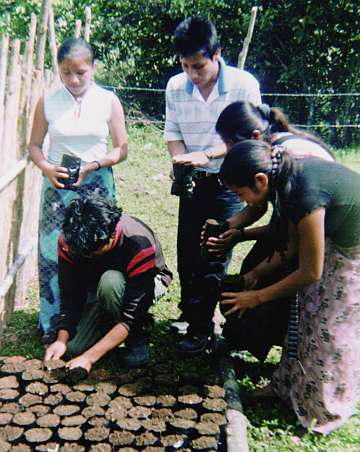 Cooperation of all the students enables them to quickly build the nursery and get seedlings started.

When the students heard that the town council intended to plant only one type of tree, they began to advocate planting a variety of species. Drawing from what they had learned in my biology class, they explained that a variety would better provide food and habitat for animals, and also be more resistant to disease and insects. The town council agreed and decided to plant five species of trees. .

Within a few months, the seedlings were transplanted. The students received more than $1,000 for their efforts.

The students debated how to spend the money. It was a large sum for them, and the options were many. Finally it came down to two choices-whether to go on a fieldtrip to Tikal, a sacred Maya site, or to buy uniforms for their soccer teams. They finally opted for the soccer uniforms.

The experience of advocating in the town council, growing and selling their trees, and earning their soccer uniforms was a great source of self-confidence and assertiveness for these students. They had learned to express their opinions and make their own decisions. Their new confidence showed clearly this year when they wrote and performed their own original theater pieces. One of the plays featured a Maya holy man who wants to save his village from an ecological disaster: flooding that would be caused by a dam. A student named Raymundo played the role of the holy man. Raymundo is one of our finest students academically, but is normally reserved and shy about speaking in public. 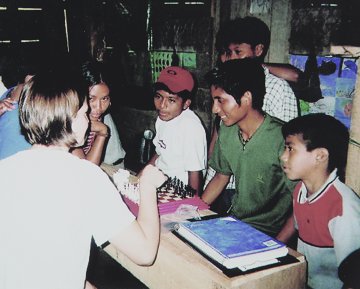 New confidence: The students are now producing original plays on subjects that are important to them, like protection of endangered animals. 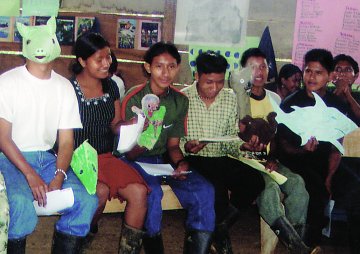 Fun and games: These students have the natural energy and enthusiasm of young people anywhere. The tree nursery allows them to channel their energies into a project benefiting the whole community.

Yet once he was in front of the audience, his demeanor transformed. On the stage, he knelt and chanted a ceremonial prayer in his native Maya language. At that moment, a loud clap of thunder resonated through the darkness and startled the totally silent audience.

The night was starry, with just a few clouds, so I thought that the thunder was a surprise sound effect created by the students. But after the play they rushed up to me: "Did you see the lightning strike on the ridge when Ray was praying? Did you hear the thunder?"

Later, when I found Raymundo, he smiled at me and said, "I want to be an actor. A Maya actor." 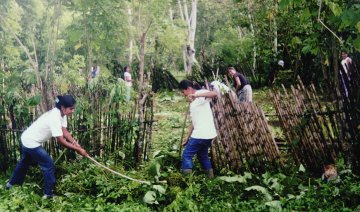 "So much more than just trees grew out of the simple decision to start a tree nursery. The greatest growth was in the students. They started to believe in themselves.? " Heather Dean

Two years ago, when I asked my students what they wanted to be when they graduate, they would just shrug their shoulders. "Who knows if I am going to pass all my courses?" they would say. "And even if I do, there may not be enough money to keep going with my education."

When I ask them now, I get very different answers. A Maya priest. A musician. A biologist. An actor. A forester. A soccer star. Looking back on our work over the past two years, so much more than just trees grew out of the simple decision to start a tree nursery. The greatest growth was in the students. They started to believe in themselves.